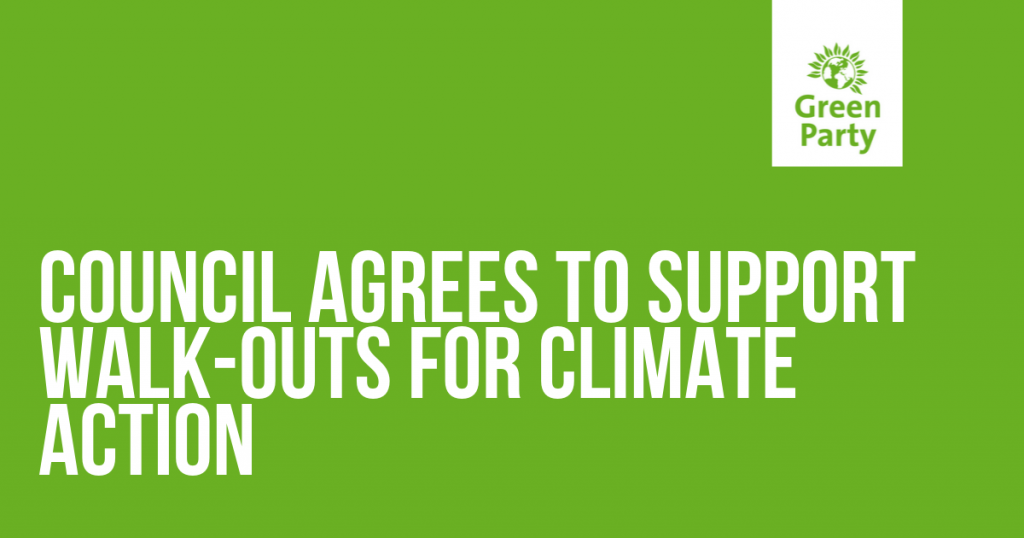 Global ‘strike for climate,’ planned for 20th September, with many young people expected to take part

Greens have welcomed news that the City Council will support young people’s right to protest for climate action as part of a global ‘strike for climate’ event, taking place Friday 20th September.

Following a Green request for the City Council to do more to support climate strikers, an urgency Policy and Resources (P&R) Urgency Sub Committee meeting was convened yesterday on the issue.

Now, the City Council will offer guidance and support to schools and employees on how to ensure people can safely participate in climate walk-outs. Parents and carers are being asked to confirm that they are happy for their children to attend, and the GMB union will help to ensure the safety of people participating, as well as Sussex Police.

Young people around the world have called for a climate protest as part of an international ‘Youth Strikes for Climate,’ movement.

Students at several schools, colleges and universities in Brighton and Hove along with other groups in the city have taken part in walk-outs from classes since the movement began, calling for world leaders to do more to address climate breakdown. Now, young people are urging all members of the public to take part in a global day of action on Friday 20th.

Councillor Clare, who put forward the Green proposals calling for the City Council to back the climate walk-outs, said:

“I’m pleased to see that the final steps have finally been taken to reaffirm this council’s support for the climate strikes on 20th. This includes providing support to young people wishing to walk-out from school and helping them to do so safely, as we requested. The council backing also in some part covers employees who wish to participate in the general strike.

“Given that all parties agreed to back the Greens in declaring a climate emergency, it is disappointing that Conservative colleagues continue to dismiss the value of young people’s actions and voices when it comes to climate change. Young people don’t just learn in the classroom – and the sooner that their demands for climate change and a lower voting age are taken seriously, the better for people, and for planet.”

“At yesterday’s Committee, we were proud to show Green Councillors’ support for the strike. This reaffirms long-standing Green support with the strikes themselves and reiterates our action on the climate crisis. In February last year we called for a clean air day which we reaffirmed in June this year.

“It was a proposal from our Councillors that saw unanimous political agreement that we are living through a climate and biodiversity crisis and need to take bold action. Following the declaration of the climate emergency – and news that we have just eleven years to act to avert climate chaos, in this year’s budget we ploughed £609k back into climate change mitigation and sustainability budgets. Greens will keep pushing for action for our young people and everyone’s future– we cannot afford to wait. As part of a global week of action, we will be proud to show our solidarity with everyone striking on 20th September.”