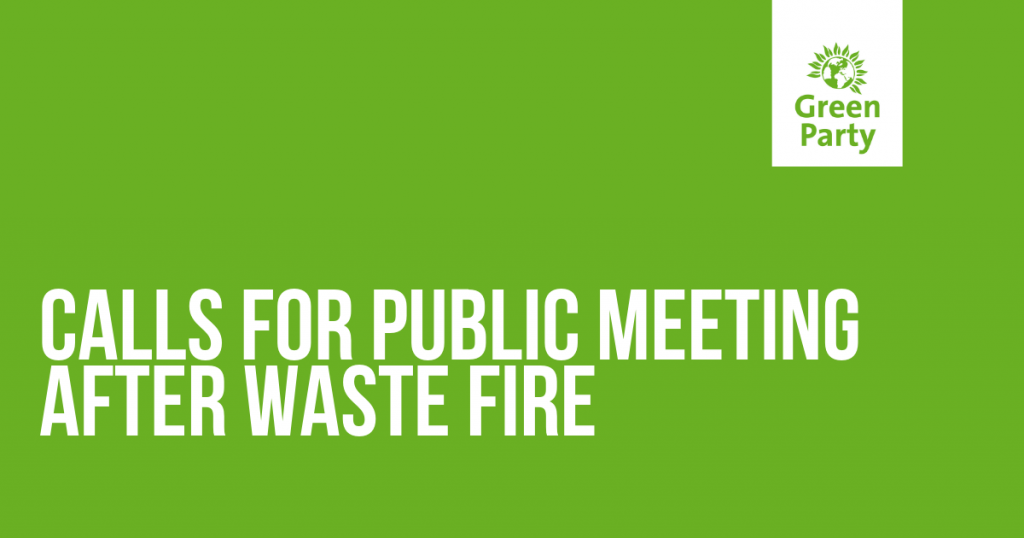 Residents must be given opportunity to voice concerns with waste contractor responsible for Hollingdean site, say Greens

Residents suffering from the effects of a fire at the Hollingdean waste depot must be granted the opportunity to question waste contractor Veolia, Greens have said.

A major fire broke out at the waste depot in Hollingdean Lane late last Sunday, 25th August, allegedly caused by a disposable barbecue. Reports from residents nearby revealed that many woke in the middle of the night to smoke penetrating their homes, with some experiencing breathing difficulties as a result. Low winds also caused the smoke to settle over parts of the city for a further two days. [1]

Concerns have also been raised about the notification process for alerting residents to safety issues, after it emerged that many residents were only notified of the fire via social media. [2]

Now Green councillors are calling on waste company Veolia, who manage the site, to commit to an open meeting with residents concerned about the effects and cause of the fire.

Highlighting the year-round resident complaints received about the odour emanating from the waste site, Greens have also repeated their call for the Labour Council to revisit the terms of the 25-year waste management contract, to ensure that it better meets the city’s needs. [3]

“This is now the second fire at the Hollingdean waste transfer facility in recent years – and Veolia must provide assurances on public safety.

“Following news of the fire, I immediately contacted the council and emergency services to establish what plans were in place to communicate with residents – many of whom do not have access to social media. I welcome news that the council will now review its procedures for warning residents about safety concerns.

“Above all, residents woken by smoke and smell from the site will want to know that this will not happen again. Site staff must also be given reassurance about the safety of their workplace. Veolia, the private company contracted to manage our city’s waste processing, must share their damage assessment and explain if sprinklers and other safety systems are in place.

“Greens urge the council to encourage an open meeting with Veolia, so residents can voice their concerns and understand what preventative actions will be taken.”

“From the outset, Greens raised concerns that the siting of this waste facility in the middle of a residential area would pose problems. The site at Hollingdean is insufficient to handle the sheer volume of waste – a large part of which is decomposing food. Odour control has been a constant problem, with residents raising frequent complaints. On top of this, waste builds up over bank holidays – which is exactly when the fire took place.

“Sadly this latest fire is yet another reminder that the city’s waste processing system is not fit for purpose. Greens want to see the restrictive waste contract with private company Veolia reviewed, to ensure food waste is treated as a useful resource rather than incinerated. It should be an urgent priority for this Labour Council to sustainably manage waste and ensure a better service for our residents, who must have the chance to hear directly from Veolia and the council leadership.”

[1] A fire at the Hollingdean waste facility took place late on Sunday, 25th August, allegedly caused by a disposable barbecue. Fire Safety officers have urged any members of the public who feel their health has been affected by the fire to contact their medical practitioner.
Brighton and Hove News, ‘Disposable Barbecue Blamed for Fire,’(https://www.brightonandhovenews.org/2019/08/27/disposable-barbecue-blamed-for-fire-at-brighton-tip/) 27.08.2019

[2] Greens including Caroline Lucas MP have raised concerns over the methods used to warn people about the fire, noting that many people were only able to access information on social media or via the Argus website. Green Councillor Martin Osborne has also called for emergency notification protocols to be reviewed. https://www.carolinelucas.com/latest/fire-at-hollingdean-depot

[3] Greens have repeatedly called on the Labour Council to revisit the 25-year, ‘Private Finance Initiative’ (PFI) contract with waste management company Veolia, agreed under a previous Labour Council at a cost of £1bn in total. Greens say the contract should be revised to allow for better waste management, such as sustainable food waste recycling options and the inclusion of more plastic items for recycling.