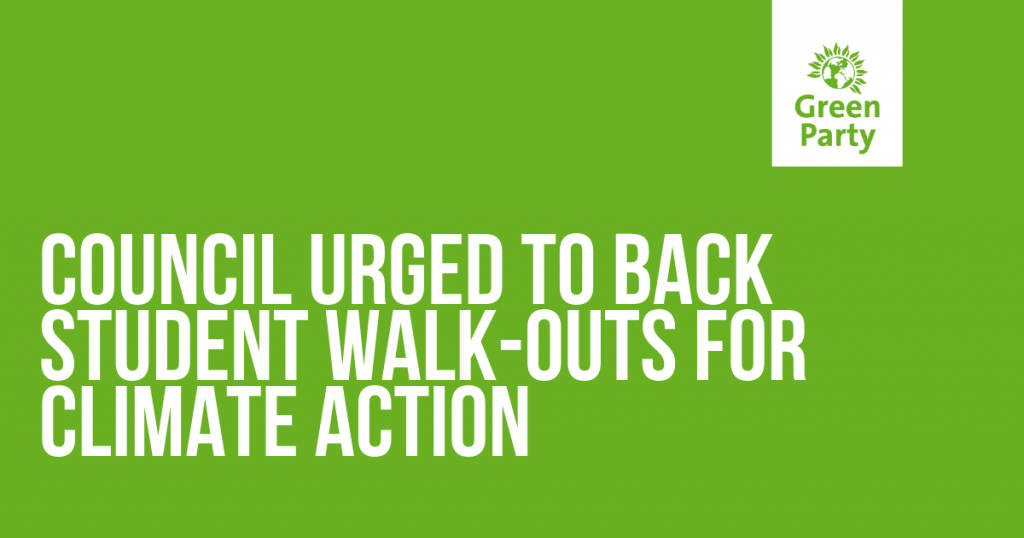 The council can lead the way in supporting people to take part in a planned day of mass climate action, Green Councillors have said.

Young people around the world have called for a climate protest on 20th September as part of an international ‘Youth Strikes for Climate,’ movement.

Students at several schools, colleges and universities in Brighton and Hove along with other groups in the city have taken part in walk-outs from classes since the movement began, calling for world leaders to do more to address climate breakdown. Now, young people are urging all members of the public to take part in a global day of action on 20th September.

Following the council’s declaration of a ‘climate emergency,’ last year, Greens have proposed that Brighton and Hove City Council do more to support people choosing to take part in the climate action, asking the council to work with the city’s schools and employers to establish safe and supportive ways for people to participate.

Greens also want to see the council recognise the demands of young people seeking action on climate change, saying that they stand to be ‘disproportionately affected,’ by escalating climate breakdown.

Councillor Hannah Clare, who is proposing the notice of motion said:

“The voices of young people are hugely important in the fight against climate breakdown – and solving the climate and biodiversity crisis. As a young person in politics, I’ve been a strong supporter of the youth movement for climate action over recent months.

“With the public-wide action in September coinciding with another youth day of action, we want to ensure that people of all ages are empowered to take part in raising awareness of climate change. We’re calling for action from the Government, asking that they recognise the demands of young people such as lowering the voting age to 16 – and calling on our own Council to support those committed to calling for change.”

“The ‘Youth Strike 4 Climate’ movement has already shown us how raising awareness can keep climate change on the agenda of world leaders. Ahead of the general climate action planned for 20th September, we want the council to support those residents who wish to take part. Council support would set an important example, and show we recognise the urgent concerns of people wishing to see action.

“Our proposals also ask the council to work with schools in establishing a standard protocol for young people leaving school, enabling those that choose to strike to do so in a safe way. Given our declaration of climate emergency, we must stand in solidarity with everyone affected by climate breakdown and the young people who stand to be disproportionately affected.”–