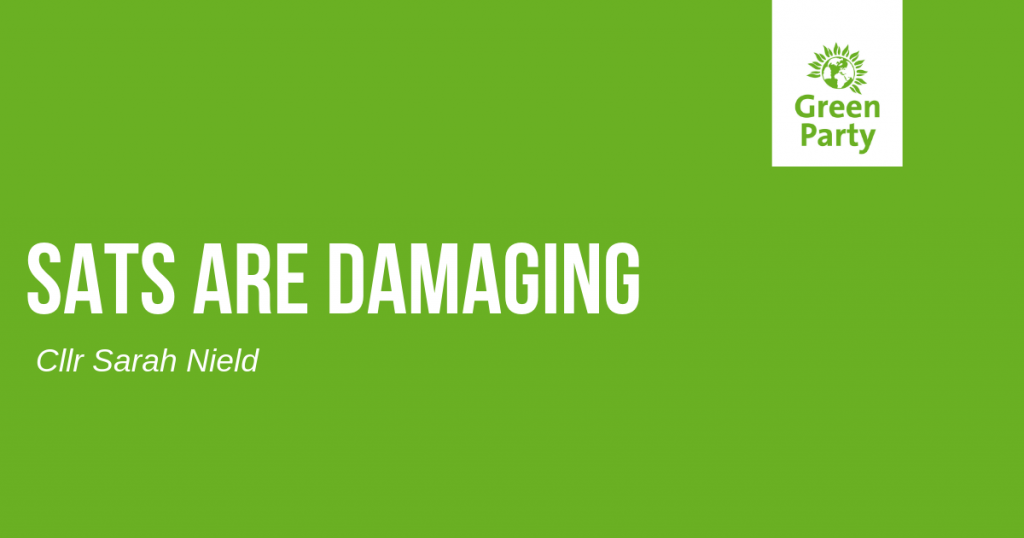 Cllr Sarah Nield is a newly-elected councillor on Brighton and Hove City Council.

This week, children in year 6 will sit their Standardised Assessment Tests (SATs).

To me, they quite simply make no sense: created to assess schools, not children, they assume that schools can be measured against each other in some meaningful way by asking their pupils a narrow set of questions about limited aspects of English and Maths.

This might work if all children were identical fact-processing units. Fortunately though, our children are unique, funny, infuriating, clever, silly, wonderful, creative young people, who are all good at different things. SATs render their individual strengths and struggles irrelevant, reducing children to data points and the rich life of a school to a ranking on a league table.

In December last year I took part in the Big SATs Sit-In, organised by anti-high-stakes-testing campaign group More Than A Score, completing mock Key-Stage 2 SATs papers in Maths and English. I did not shine in either, although to be fair, I think if I’d had the months of cramming Year 6 kids get I too might have reached the “expected standard”.

An exam-room-full of parents, we had a good laugh at our terrible results, but were left shocked by the narrow scope of the questions on which our children are being judged and the stressful conditions under which they are expected to perform.

Research since conducted by More Than A Score and YouGov shows that 93% of school leaders agree the tests don’t provide a fair representation of a pupil’s abilities. Nearly three-quarters believe assessment under exam conditions is an unfair way to measure academic capabilities in primary school.

The research also highlights the negative effect of SATs on the Year 6 curriculum. School leaders almost unanimously agree that English and Maths are prioritised to the detriment of other subjects such as music, art, drama and science, and that too much time in what should be a carefree last year of primary school is spent preparing for the end of year SATs.

Under pressure to maintain their school’s place on the league table the broad, varied and interesting curriculum our overstretched and underpaid teachers try to give their pupils too often gives way to hours and hours of teaching to the test. Rote-learning of grammatical terminology must leave some children feeling at age 11 that maybe education simply isn’t for them. While others might be proud of their ability to spot a fronted adverbial at 100 paces, it’s a questionable corner of knowledge to prioritise above all the other things a child might be good at.

The absurd SATS system is damaging, misleading and not fit for purpose. An overwhelming majority of primary school leaders (93% in MTAS’s research) believe that the government should review the current system of standardised assessment, and that education policy is decided without sufficient consultation with heads or other experts.

I’m proud to have been elected as a councillor for a party that takes a clear stance on this. The Green Party believes in developing an education system that will nurture a desire to learn throughout life. We believe in a child-centred approach to learning which builds on the skills and interests of each individual child and will therefore end the current testing regimes and rigid age-related benchmarking.

It’s time to listen to the teachers and heads who know our children best: let them have their say in devising a more appropriate system of assessment, and give our children back the joy of a wide-ranging education in which they can discover their strengths and be celebrated for their abilities, ready to take on the big world of secondary school with confidence as they grow into rounded human beings, not data points on a government sheet.

To learn more about More Than A Score, visit www.morethanascore.org.uk