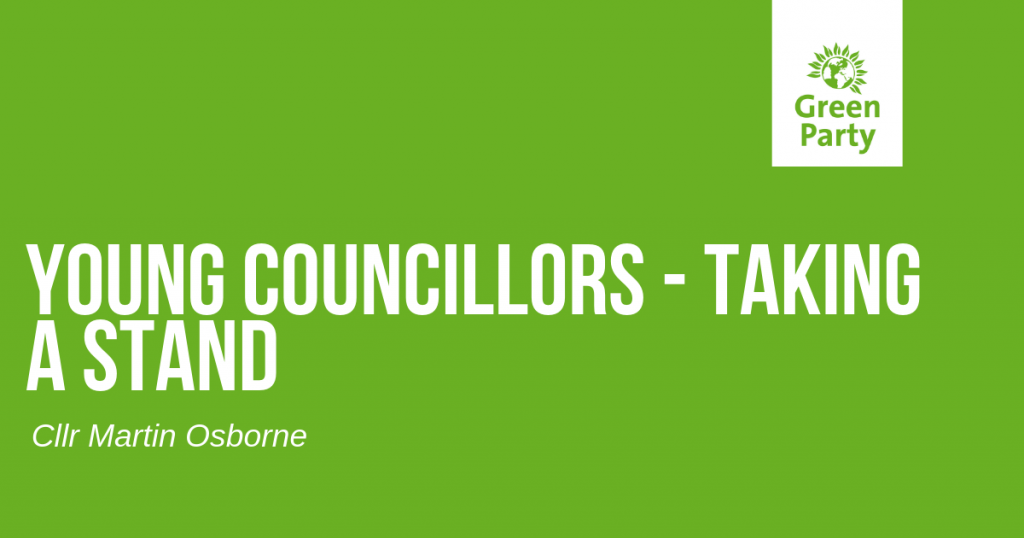 This post is written by Cllr Martin Osborne, Councillor for Hollingdean and Stanmer Ward.

his May I was honoured to be elected as one of the 19 Green councillors to Brighton and Hove City Council. As a 25-year-old, I am pleased to be representing the younger generation. I was particularly proud of the other two young Greens that also got elected alongside me, Cllr Amy Heley and Cllr Hannah Clare.

We desperately need more young people in politics and councils. When looking at the average age on councils, the facts speak for themselves. The average age of a councillor is 60 and only 10 per cent of councillors are under 40, with only one per cent being below 25. This isn’t right.

Councils up and down the country fail to represent the variety of people in their communities. Especially in areas that have high numbers of young people, such as in cities with multiple universities, it is important to have young voices on the council whom the young people can connect with and who can understand their issues. Otherwise the council becomes removed from young people’s lives when in reality it has everything to do with how they live.

What we really need in politics at the moment is fresh ideas and a new perspective. We need elected officials who understand the failings of the current system and who have the passion and drive to change them. Most young people have lived all their adult lives in austerity and have seen the divisions in society gradually widen from the financial crash. We’re part of a generation where social mobility has stalled and where we are now worse off than our parents, part of an ever more precarious workforce.

However, despite the doom and gloom about the current situation, young people are equipped with the unique skills that can drive change. By using new technology to connect and organise, young people can be the change that they want to see in the world.

What society as a whole needs to do is tell young people that they are an integral part of the solution and empower them to speak up and lead the change. We have seen how much of an impact young leadership can have in the recent success of the Youth Strikes 4 Climate movement – and if you attend your local youth council you’ll be impressed by the quality of debate and passion on display.

For too long, young people have been sidelined; it’s no wonder that voting figures are so low amongst young people when they don’t have elected officials who speak their language.

What I can say is that being a young candidate is an exciting time – whether you lose or win it’s a great experience and a chance to learn new skills and practice other ones. After standing as a paper candidate for the first time in 2018 and truly engaging with the democratic processes, I knew that this was something that I wanted to explore further. Luckily the right time and right place meant that I was able to.

Seriously running for council is not to be taken lightly. It involves a lot of time walking round delivering leaflets and talking to people on the doorstep. I had several close to 30,000 step days pounding the streets and know other candidates who did even more!

You soon get into a groove and it can be a very enjoyable experience. Most of the time residents appreciate your effort and many think it’s great that a young person is a candidate. I never once had any comments about me being too young or inexperienced, nor did anyone comment about me not being originally from the area.

The hard work for myself and my two newly-elected Young Greens on Brighton and Hove City Council starts here. We’re currently going through lots of induction and getting to know our area further. I’ve been elected alongside two Labour councillors in the ward, so I’ll be navigating how we work together to best serve the residents of Hollingdean and Stanmer. At just one seat behind Labour, the Greens are also now the official opposition on the City Council, meaning we will be working even harder to hold Labour to account.

With the recent green wave, I hope young people are inspired to stand up in all parts of the UK and for all elections. With all the current problems, we can be the generation that changes things. It’s time for young people to stand up and be counted in politics!