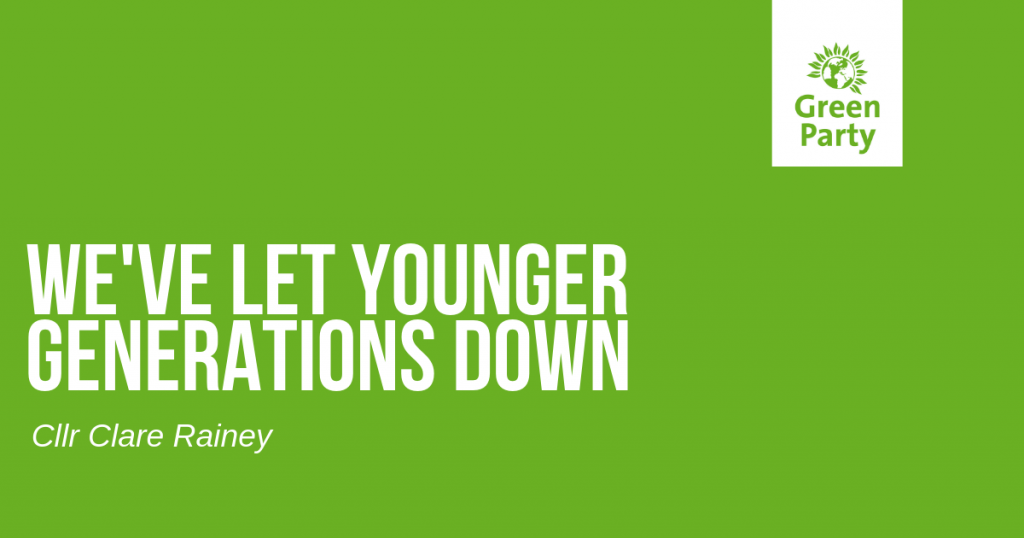 This post has been written by newly-elected Green Councillor Clare Rainey, councilor for Queens Park ward.

On Sunday we are celebrating National Children’s Day which is all about the importance of a healthy childhood, and the need to protect the rights and freedoms of children in order to ensure that they can grow into happy, healthy adults.

With our climate emergency, our current generation of children are facing a major threat to their chance to do so.

Scientists identified that human activity was increasing the Earth’s temperature over 30 years ago.  Increasing evidence shows the disastrous effect it will have on the natural world and human society as we know it. However the realisation that we need to take action has only became widely accepted relatively recently.

We should have acted earlier

As a society, we could have spent the last 30 years developing alternative and renewable sources of energy such as solar, wind and hydro-electric, and phasing out the burning of fossil fuels. We could have made the destruction of indigenous forests a criminal offence worldwide, retaining large areas of carbon-absorbing forest which have now been lost. Yet, we are facing a much more serious climate crisis than we would be if we had acted earlier.

Understandably the younger generation feel that they have been let down and that their futures have potentially been sacrificed due to our failure to act.

The #YouthStrike4Climate gives me hope

In recent months, children and young people have been making their voices heard by taking part in #YouthStrike4Climate, the international movement spearheaded by Greta Thunburg.

As an adult committed to combating our climate crisis, I spoke to a 13 year old girl in Brighton and Hove who has participated in the strikes. She told me that by walking out of school in large numbers and being willing to face the consequences of doing this, children are demonstrating how strongly they feel.

This movement certainly translated into our campaign. In the run up to the local elections in Brighton and Hove I was struck by the amount of enthusiasm and support the Green Party had from young people, including from children much too young to vote.

Young people, parents and grandparents on doorsteps all expressed their concerns to me about the latest reports on our changing climate. The increase in people voting for the Green Party shows that the people of Brighton and Hove want action to prevent a climate crisis.

A team of passionate climate campaigners

There’s more we can do outside of the ballot box. We can all help to reduce carbon emissions by using and wasting less energy; making good consumer choices such as renewable energy, locally produced and seasonal food, and sustainably made products; reducing food waste; travelling by foot, bicycle or public transport instead of driving or flying whenever possible; recycling; and reusing/mending consumer goods.

But as campaigners, we can also demonstrate to the government how important taking action is by joining environmental groups, taking part in protests and writing to our MPs.

The Green Party is committed to working with businesses to identify ways of making Brighton and Hove carbon neutral by 2030, and to increase the energy efficiency of new and existing homes. After Green Councillors declared a climate emergency in Brighton and Hove last year and after winning £690,000 in this years budget to combat it, I’m thrilled to be joining a team of passionate climate campaigners who can help us make change for our city.

Addressing the climate crisis is a huge challenge but is the only way of ensuring our children have a healthy, happy and secure future.