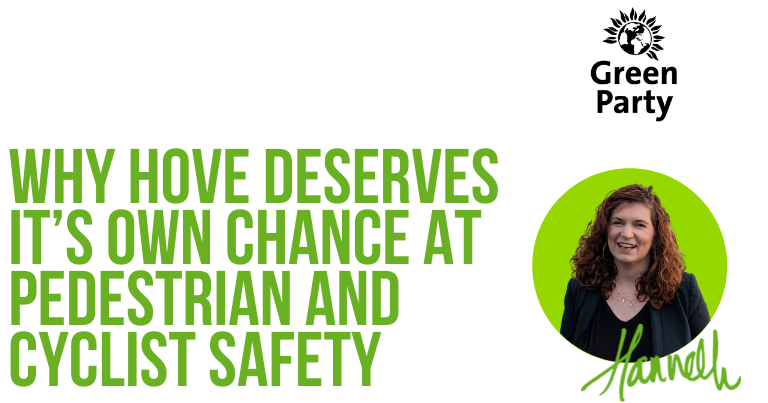 A recent comment at the end of an email from Bricycles struck me as really important. In a section named ‘Hove we have a problem’, they highlighted how Hove and Portslade has been increasingly left behind when it comes to ‘active travel’ (walking and cycling) improvements. As someone who gets around by cycling and as a councillor in Hove, this is something I care strongly about.

Quieter roads over lockdown have been shown to encourage more women to take up cycling. Official figures from the Department for Transport showed an increase of over 50% of women cycling. Local data in London could even pinpoint increases in cycling to areas where councils installed Low Traffic Neighbourhoods, segregating cyclists from fast moving traffic.

Not only are women more wary of cycling on busy roads, we know that women and children are amongst the most vulnerable road users. It is our duty as a council to provide our residents with the infrastructure to keep them safe as they travel.

In light of this information, I find it difficult to understand why the Labour MP for Hove and Portslade, Peter Kyle, would fail to support the temporary Old Shoreham Road cycling lane. In a recent interview on Politics Live, he chose to share a number of mistruths about the temporary walking and cycling measures introduced in Hove during lockdown.

Starting with who actually did it. Despite his claims, it was under a Labour council that the A259 and Old Shoreham Road cycle lanes were planned. As Greens, we backed it (and I did with much delight as these are both routes I regularly cycle on). But I won’t accept the rewriting of history in this way.

In the public consultation reviewing the temporary cycle lane on Old Shoreham Road over 75% of respondents who used the lane during the day said they felt safe or very safe doing so. In fact, 36% of those who cycled in the temporary lane would have previously taken their car for the same journey.

Many have reported to us how they took up cycling as a family. We saw new people cycling to school and work as a result, with an overall 61% increase in cycling between 2017 and 2020 with the introduction of the temporary lane. That’s an amazing achievement. Now the temporary cycle lane has been removed, some have taken to continuing in a Bike train. Others have launched a petition specifically for the reason that they want a safe route for their family.

The lane wasn’t perfect, nor was it totally safe. I agree that we need a permanent solution, properly separated from the road (much like it is on sections of the road nearer Brighton). That’s why I’m delighted that this week, our Local Cycling and Walking Infrastructure Plan was approved – which includes plans for it’s eventual return.

The Old Shoreham Road temporary cycle lane was successful in enabling more people to safely switch from driving to cycling on this route, with no impact on emergency vehicles. The vision for what a permanent, well-planned lane will do is incredibly exciting.