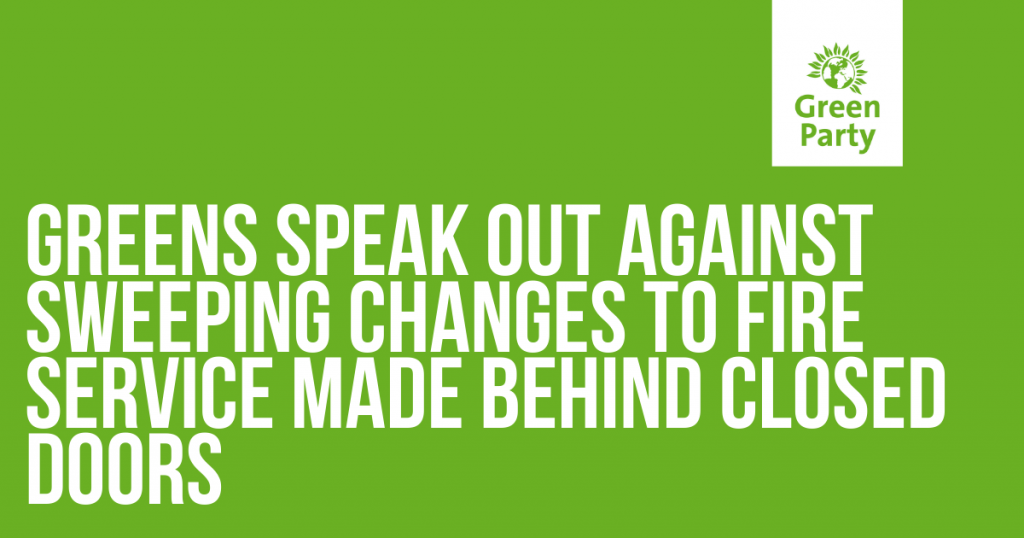 Greens have called for greater public scrutiny over fire service decisions after critical changes to the management of 999 fire emergencies were made in a meeting held behind closed doors.

Members of the public, press and fire service staff units were excluded from an East Sussex Fire Authority (ESFA) meeting, held to decide upon the future of the control room that handles 999 calls for the East Sussex fire service – including Brighton and Hove.

The outcome of the private East Sussex Fire Authority meeting will see the management of 999 calls for Brighton and Hove move to a control room based in Surrey, despite concerns over the impact on public safety. Surrey Fire and Rescue Service was recently rated ‘inadequate,’ by inspectors who found that the service provoked ‘serious concerns,’ when reviewed for its performance in keeping people safe.

Greens voted against the decision to move the control room, raising serious concerns over the suitability of Surrey Fire Service to manage calls relating to East Sussex and Brighton and Hove, the impact on jobs and detrimental effect of losing local expertise when responding to emergencies.

“Residents want the assurance of knowing that their fire & rescue control room is locally based, with a local workforce, who have local expertise. Instead, this decision means more stress for local control room staff, who will now be relocated to Surrey, and who will be dealing with an increase in cross-county border emergency calls.

“In short, today’s decision is incredibly expensive and short-sighted. The fire service needs investment, and Greens believe that a local, standalone control centre would have been the best option for the future. And whilst detailed information was provided, the recommendation in the papers did not offer this, as at was cited as too costly. But today’s option was voted on simply because it was the cheapest on the table – when we need to put our fire service, its staff and our public safety first.”

“I remain concerned that such an important decision has been made behind closed doors as the detail and reports were kept confidential. The public has a right to know how public money is spent, especially such significant sums of money.

“I am also very concerned about the impact this decision has both on public safety and on the staff who work to respond to critical emergencies in the Sussex Control Room. Many employees could now face increased working hours and changing working conditions including longer journeys to work, which could negatively impact their wellbeing. Longer journeys for staff will also increase carbon impact, at a time when we should be looking to reduce it. Given the nature of the work we ask staff to undertake, we must do better to prioritise public safety.”–