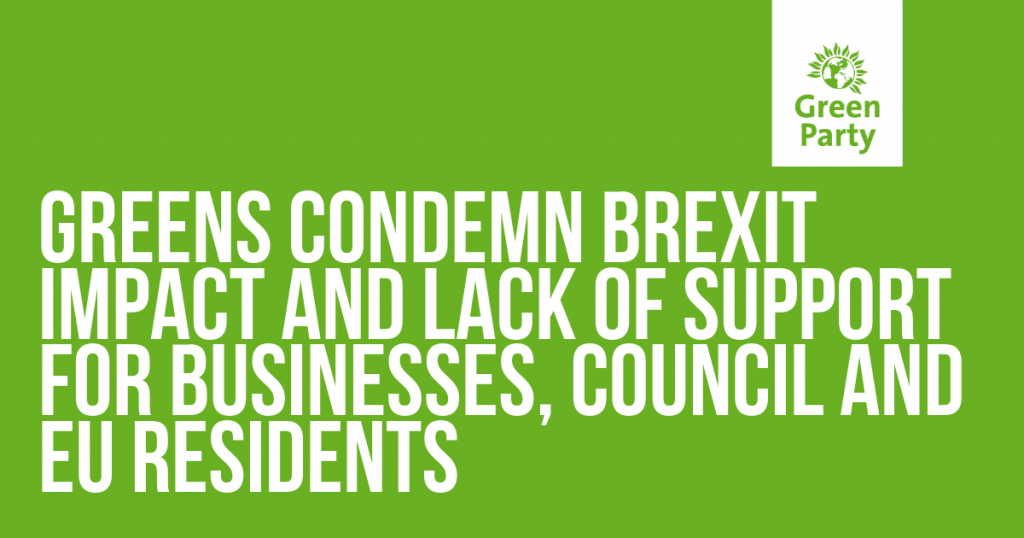 Local councillors were asked to support a set of proposals designed to support residents and businesses affected by a potential ‘no-deal’ Brexit at a meeting of full council 25th July. [1]

It is estimated that Brighton and Hove receives an estimated £340k a year in European funding, with council Brexit scenario testing stating that no-deal could lead to business closures and recruitment and retention problems. Pointing to statements that indicate new Prime Minister Boris Johnson would be prepared to take the U.K out of the European Union on a ‘no deal’ basis, Green Councillors urged the council to establish how E.U funding programmes for the city would be replaced. [2][3]

Green Councillor Marianna Ebel also asked the council to provide better support to EU citizens hoping to stay in the U.K in the event of the U.K’s exit from the EU. An estimated 20,000 EU citizens reside in Brighton and Hove, but will be expected to apply for ‘U.K settled status,’ to keep living in the city.

Cllr Ebel voiced the concerns of EU residents who say they have been provided with little information on how to apply for settled status, including how to manage the online application, which to date is only available on an Android phone. [4]

Green Councillors Siriol Hugh-Jones and Cllr Ebel called on all councillors to consider how the council can do more to support our European ‘colleagues, partners, family and friends.’

“It is estimated that a ‘no-deal’ Brexit could mean the loss of 3,950 jobs in Brighton and Hove alone. When I first saw this, I admit I found it remarkable that a UK Government would allow a ‘no deal’ Brexit to happen. After all, Brighton & Hove would be far from suffering alone.

“Sadly, the incoming Prime Minister appears to care little about people’s jobs and livelihoods or the impact of any loss of EU funding. Greens refuse to allow this critical issue to be neglected by our council.

“We have secured Labour backing for the council’s Chief Executive to write to the Minister to find out how the government intends to replace this funding. We have also requested that Government consider a freeze on business rates for local businesses to help them weather the loss of staff and potential downturn in the economy following a no-deal Brexit. I am disappointed that our Tory colleagues failed to support local business and instead chose to abstain. But perhaps this is the logical outcome of their new leader’s dismissive attitude towards the impact of Brexit on our economy.”

“In addition to the impact that will be felt by our businesses and council in terms of funding and jobs, the prospect of Brexit is also causing a great deal of anxiety and distress for EU citizens living in Brighton and Hove. EU citizens are our friends, partners, family members, neighbours and colleagues. The Government’s expectation that people who have already been living and working here apply for ‘settled status,’ has not been matched with good support. Instead, they have created anxiety, fear and uncertainty. EU citizens who have lived and worked here for years should not have to fear deportation. Instead, we want to see the council do all it can to ease the pressure, provide support with applying for settled status – and demand that the Government rethink the entire, failed, ‘no deal’ Brexit process.”

Labour councillors voted in support of the Green proposals at a meeting of full council on 25 July. Tory councillors abstained.