Greens remain the only party on Brighton and Hove City Council consistently speaking up for our community against Brexit. Your local councillors have been fighting to ensure public services are protected, and to oppose any weakening of environmental protections or worker’s rights. Most of all, Greens stand in solidarity with our communities – who must be given a People’s Vote.

Join us in fighting against a Hard Brexit

Fighting against a hard brexit

Last year the EU invested £17m to support 600 farmers around Brighton; it has invested over £100m to support research projects and £1m to create jobs. 50 local projects could stand to lose EU funding after Brexit.

The Local Government Association calculates that local communities face an £8.4bn funding gap from the point the UK exits the EU.

In Parliament, on the Council and in the European Parliament - your Green representatives are working hard for you.

Caroline is working to deliver a People's Vote on Brexit

“All of us know so much more now than we did in 2016, and a People's Vote would be your first chance to vote on the facts. We're going to have to live with the consequences of this decision for decades to come, and it will affect young people most of all. So let's just be sure - let's vote on this together as a country. Don't leave it to the Westminster elite to decide for you.”
Caroline Lucas, MP

We're being let down by a Tory government that's driving through a dangerous Brexit.

Dear Leavers, Thank you. You were right to give the establishment a kicking.

If you were in control, what would you change first about life in the UK? #LetsTalk @CarolineLucas pic.twitter.com/5YRIVIGURj

Caroline has been steadfast in her opposition to Tory Brexit plans. She has consistently voted against the Government's damaging deal and is campaigning to protect EU citizens who've built their lives here, workers' rights, freedom of movement, animals and environmental protections no matter what happens with Brexit.

Calling for a People's Vote

Caroline is a leading supporter of the People's Vote campaign to give the public a say on the outcome of the Brexit negotiations. Nearly three years after the referendum result, we know so much more about what Brexit actually looks like, and the Leave campaign has been exposed for breaking electoral laws and lying about what leaving the EU would mean for the UK's public services. Caroline believes democracy is a process - not a one-off event - and the public must have a vote on the Brexit deal secured by the Government, with the option to remain in the EU if they wish.

Working to address the causes of Brexit

In 2019 Caroline launched Dear Leavers - a project that aims to change the divisive conversation about Brexit, and find common ground between Leave and Remain voters. Caroline believes many people were right to use the 2016 referendum to give the establishment a kicking - because the status quo is intolerable for far too many.

She is working with communities to explore the reasons why so many voted to Leave, propose democratic reforms to empower communities and find shared solutions to issues such as inequality, austerity and deindustrialisation.

Green Councillors have continually raised questions on Brexit and the impacts on the City. We have:

We've successfully proposed that Brighton and Hove City Council become the first English Council to formally back a ‘People’s Vote’  - and write to the Government calling for one and renewed our calls.

Green councillors asked for a number of ‘Green Guarantees,’ including no NHS sell off, security and sanctuary for migrants and refugees and reinstatement of bursaries for nurses affected by Brexit ‘exodus’. We demanded that the council lobby the Government for impact assessments, so our city can understand what leaving the EU means.

Greens called for the Council to remain a member of Eurocities, a partnership which has brought in funding and support for employment work, career advice and environment project. We also pushed for an analysis in every council report that shows how Brexit will affect the delivery of our city’s public services and for reassurance that Brighton and Hove City Council will maintain existing protections for workers and the environment in the event of the UK leaving the EU.

Most recently, we called for EU Nationals to be given support and information by Brighton and Hove City Council on applying for settled status and asked for the council to establish how E.U funding programmes for the city would be replaced.

We sit on the Council's Brexit Working Group and are making sure the city is as prepared as possible for Brexit.

More of our work on Brexit 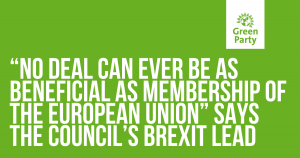 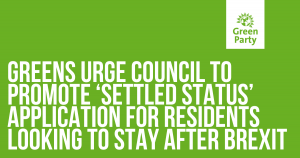 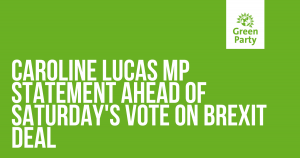 Caroline Lucas, Green MP for Brighton Pavilion, issued this statement ahead of the House of Commons debate on Saturday, on the Prime Minister’s Brexit deal. “There is nothing in this […] 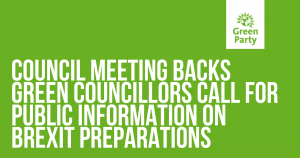 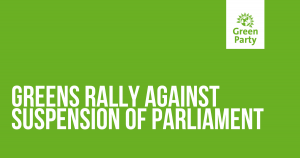 Greens rally against suspension of Parliament

Call for emergency council meeting to plan for Brexit Green Councillors have called for an emergency meeting to discuss the council’s response to Brexit. Rallying against the suspension of Parliament […] 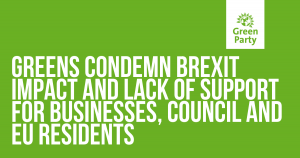 Speak out for anti-Brexit Brighton and Hove

15 January 2019 Speak out for anti-Brexit Brighton and Hove Labour Party leadership: support a People’s Vote, Greens urge The Labour Council must speak out against a damaging Brexit deal […] 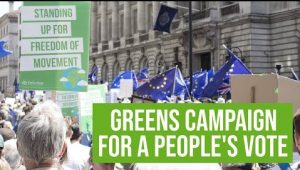 We have every right to be anxious about the impact of Brexit on our Council and its services, writes Councillor Phélim Mac Cafferty following a speech on the People’s Vote […]

Brexit: What it truly means to 'Let the People Decide.'

Brighton and Hove City Council has become the first to support a Green proposal for a public say on the terms of any Brexit deal (a so-called ‘Ratification referendum’). Green […]