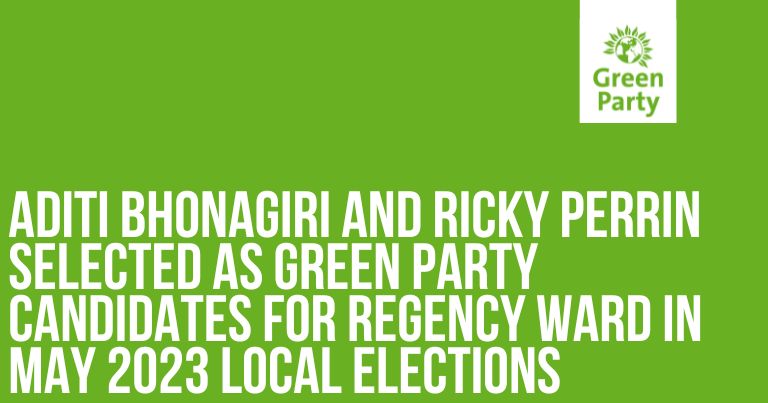 Alongside her role in the NHS, Aditi is a support worker with a local homeless charity and has knowledge in a range of fields such as climate change, environment and public health gained through 10 years in social science research and communication.

Ricky had worked for 10 years in the corporate world before a spinal injury left him unable to walk. He overcame physical and mental health challenges and became involved in sport management, disability sports and recently began working as a diversity, inclusion and access expert to make companies, buildings and cities more accessible.

On her selection, Aditi Bhonagiri said:

“It’s an honour to be a Brighton & Hove Green Party candidate for a ward that is the beating heart of the city and whose residents are warm, creative and welcoming. I lived in Regency for five years and it holds a very special place in my heart. I would be grateful for an opportunity to represent its residents in the community and at the council.

“I’m passionate about community-led initiatives and local action based on securing the needs of the most vulnerable; fighting food and fuel poverty; tackling rough sleeping; biodiversity protection, climate change mitigation and adaptation; art, culture and psychosocial development; and mental health and wellbeing.

“Let’s model Brighton & Hove to become a city of the future that is brave and faces its challenges head on with a collective sense of community, connection, and compassion.”

“I love Brighton & Hove and everything about this city. I have used every service in the council, and I want to use those lived experiences to make things better for everyone.

“Regency is a complex mix of homes, businesses, shops and schools each carrying their own needs and which I would be proud to represent. I want to continue to tackle the real issues people and businesses face as we all recover from years of the austerity the Conservative government has imposed.”